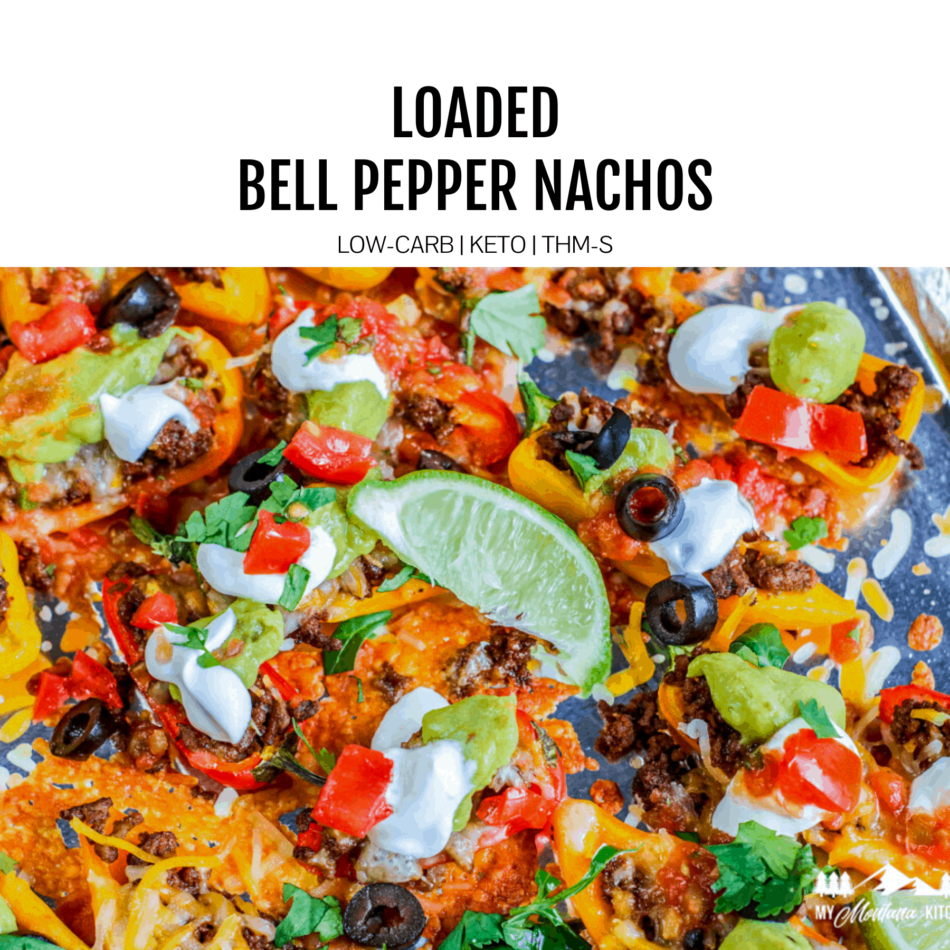 We could make money with the products/companies mentioned in this post. As an Amazon Associate, I earn from qualifying purchases.

Packed with flavor, these keto nachos are healthy nachos made with bell peppers, ground beef, and guacamole. You’ll never wonder if nachos can be healthy with this healthy nachos recipe.

Sometimes you need a snack that can double as a meal. Pepper loaded nachos are exactly that snack.

What are nachos made of?

Nachos are made up of layers of meat, cheese, and toppings that are collected with tortilla chips that are the bed on which the layers sit.

Tortilla chips are a pretty standard base; however, there are other options (such as bell peppers) for a healthier base for nachos.

Nachos can also be easily customized and shared.

Nachos are often referred to as tortilla chips which serve as the base. Tortilla chips are usually fried, which fills them with saturated fat, sodium, and calories that most of us don’t want in our diets.

Like bread, which is the base of many dishes, there are alternatives to unhealthy tortilla chips.

Find out how to make low carb fries here.

Keep in mind that you are responsible for your nacho ingredients, so research options that work for you.

What substitutions can I make?

There are several items you can substitute in this recipe.

Not a fan of ground beef? Instead, use ground turkey or shredded chicken.

Stick to the sweeter bell peppers instead of the hot peppers (unless you’re ready for a fire in your mouth).

What can I eat with my loaded pepper nachos?

Nachos can be a meal in and of themselves, but sometimes you want to add a little something extra to your plate. Consider adding my Simple Avocado Salsa on top or adding Bell Pepper Nachos to these Low Carb Tortillas.

Sometimes, we like to make a lot of traditional side dishes to eat as a meal. Maybe I’ll make these loaded nachos with jicama chili fries, crispy quesadillas, and jalapeño popper sauce.

For a party, you can make smaller nachos or separate the nacho pieces so everyone can make their own layers.

The versatility of these nachos is endless.

How do I make these nachos with peppers?

First, in a skillet over medium-high heat, brown 1 pound of ground beef.

While meat is cooking, peel and cut 1 bag of bell peppers in half. Make sure to remove all the seeds.

Next, preheat the oven to 425 degrees. Prepare a large baking sheet with aluminum foil and a drizzle of nonstick cooking spray.

When cooked, drain and return the meat to the heat. Add 1 tablespoon of taco seasoning and ¼ cup of water. Bring to a boil and cook until the water has evaporated. Get out of the fire.

Place the chopped bell peppers on the baking sheet cut side up. Stuff each pepper with the meat, packing evenly.

Cook for 10-15 minutes or until cheese has melted and peppers are tender.

Enjoy this healthy alternative to nachos!

Looking for an easy low carb meal? Look no further than these pepper-laden nachos. All the flavor, you won’t be able to resist this ketogenic treat. Try it today!