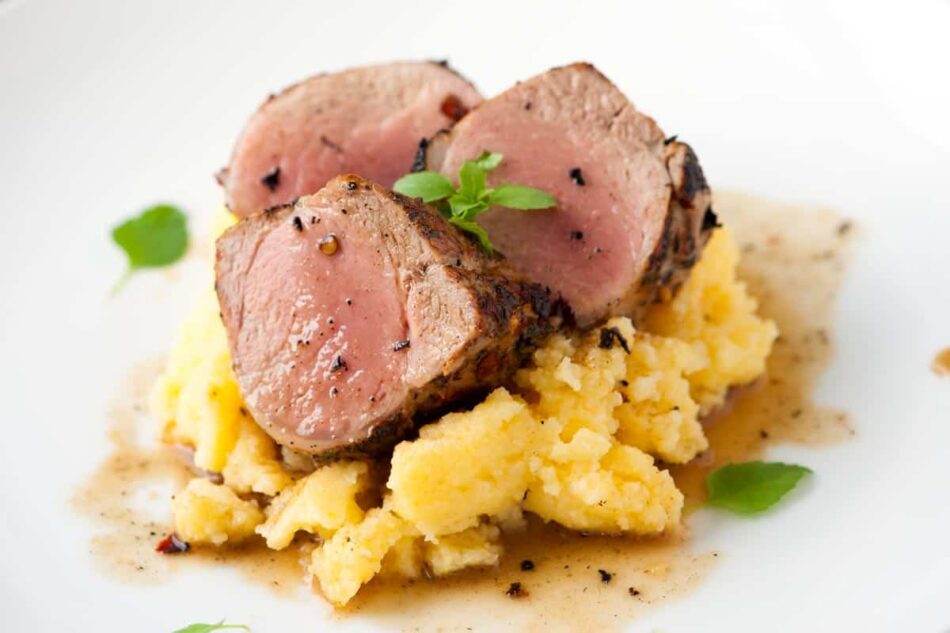 How to cook the best and juiciest pork loin in less than 30 minutes. We like simple recipes. That’s why this pork roast recipe is a favorite here – it calls for a hot skillet, rub with spices or herbs, and pork tenderloin (also called pork tenderloin outside of the US). Go to the easy recipe for roast pork tenderloin

Pork tenderloin is lean and has almost no fat. So keeping it moist and juicy can be tricky. This is unless you know these steps for the most succulent roast pork loin. You don’t need a specific recipe for this, just the steps to cook it better. Tastes are up to you; Here are some tips. We use the same method when preparing our Pork Tenderloin with Peppers and Onions.

For the best pork tenderloin, pat the pork dry and season generously with salt and pepper.. Drying the meat helps the salt and pepper stick together. It also means less sizzling in the pan when browning meat.

Step 2: Brown the pork in a pan

Before roasting, we always brown the pork on all sides. After dressing, toss in hot skillet; we love our cast iron skillet. Brown on all sides until golden brown. It’s okay if the pork is still raw in the middle.

When the pork is browned on all sides, it is ready to bake. Yes, andyou’re using herbs or seasonings, now is the time to add them.

You could have added some herbs before browning the pig, but you risk burying it. By adding them after blanching and before roasting, the herbs will add flavor, but won’t turn brown or bitter.

Step 3: Finish in the oven

To finish cooking the pork, we slide it into a hot oven. We keep the oven temperature high and roast the pig for 15-20 minutes.

Cook the pork until an internal thermometer inserted into the thickest part registers between 145 and 150 degrees F.. This means the pork will be juicy and slightly pink in the middle. If you’re not a fan of pink, cook a bit longer, but be careful not to overdo it.

In our easy lemon chicken recipe, we use the same method: season, brown, and then finish in the oven until cooked through. It makes chicken perfectly cooked and juicy with a crispy skin.

For the juiciest pork tenderloin, make a quick sauce in the skillet. To do this, using the same skillet you cooked the pork in, add about 3/4 cup of liquid. You could use apple cider (this is what we did), wine, chicken broth, vegetable broth, or even beef broth. Cook that liquid until it has reduced by half, then add a tablespoon of butter.

You may already have a lot of half-used spice dish towels in your pantry, here are some tips on how to use them in this recipe. Our recipe involves three things: pork, spices, and a degreasing liquid to make the sauce in the pan.

Updated recipe, originally published in January 2012. Since we published it in 2012, we have optimized the recipe for clarity. – Adam and Joan

For a better, juicier pork tenderloin, brown the pork on all sides in a skillet before finishing in the oven. The spice mix you use is up to you; we love using a blend of hot steak spices or fresh herbs like rosemary and thyme. We love to serve this pork over polenta or mashed potatoes.

Watch us make the recipe

1 to 2 tablespoons the rub/seasoning mix of your choice, fresh or dried

Preheat oven to 425 degrees F. Cut each fillet from any silver skin (this can be tough once cooked. Use a small, sharp knife and slide the blade down and out to remove). Pat the pork dry with paper towels. Then season generously with salt and pepper.

Heat a tablespoon of oil in a large cast-iron skillet or heavy-bottomed oven-safe skillet over medium heat. Add the pork tenderloins and cook, turning occasionally, until browned throughout, about 2 minutes per side. Sprinkle seasoning mix or herbs over pork.

Grill for 10 to 15 minutes or until an internal thermometer inserted into the thickest part registers 145 to 150 degrees F.

Transfer the pork to a large plate and cover with foil. Leave to sit for 10 minutes. While the pork rests, return the skillet to medium heat. Add apple cider and simmer until reduced by half. Add the butter and serve sprinkled with pork.

Advice from Adam and Joanne

If you make this recipe, take a photo and use the hashtag #RecetasLatinas – we love seeing your creations on Instagram and Facebook! Find us: @inspiredtaste