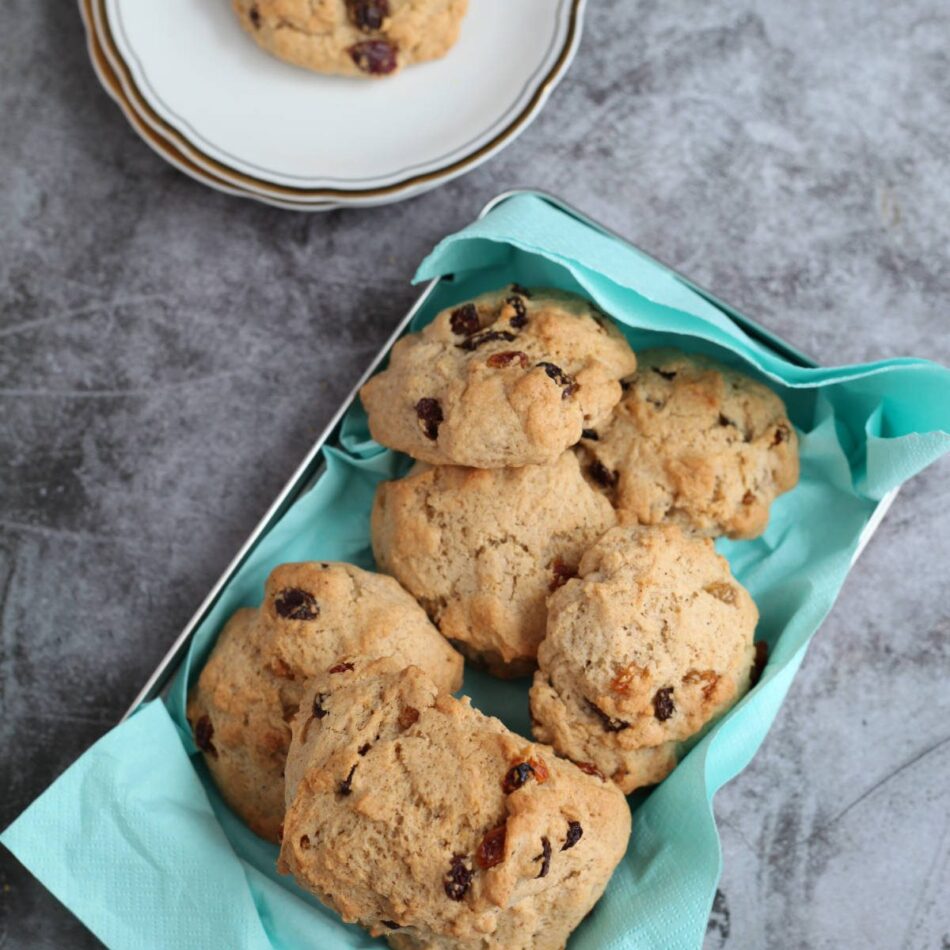 Rock cake is a small round cake with raisins halfway between a scone and an American cookie. Its surface is rough and uneven like a rock. Originally from the United Kingdom, this dessert, also known as a rock bun, is a very popular cake in Jamaica. It has the peculiarity of being slightly sweet and having a very crumbly dough.

What is rock cake?

Also called a rock bun, this recipe is a very crumbly raisin biscuit from the UK. It owes its name to its irregular shape and texture reminiscent of a rock. However, although their name is far from appealing, they are essential at tea time.

These cookies contain little sugar and eggs and have the particularity of being very crumbly. They should be eaten hot as soon as they are baked. This recipe is quick and easy to make. Also, these raisin cookies can be stored for a few weeks in a metal box.

The first recipe for rock cakes appeared in 1861 in a cookbook by the famous Mrs. Beeton. In her book, this lady mentioned 2 cookie recipes that would become the rock cakes we know today.

In the first recipe, the cookies were made up of flour, “wet sugar”, milk, lemon and yeast. In the second recipe, the cookies were more like shortbread cookies because they didn’t contain yeast. Its consistency was more compact than the previous ones. In addition, the recipe of the time mentioned the presence of dried fruits such as raisins or other types of dried berries.

Although they emerged at the end of the 19th century, these cookies became especially popular during World War II. In fact, the Ministry of Food widely promoted them among the population because these cookies required fewer eggs and less sugar than regular cookies. Because of this, rock cakes quickly gained popularity with British families during periods of rationing.

Also, during World War II, flour was a rare and precious commodity. For example, early rock cake recipes used oatmeal instead of white flour. In fact, these were much more affordable in local British grocers than white flour.

What is the difference between English rock cake and Jamaican rock cake?

Rock cake is very popular in the Caribbean and especially in Jamaica, which is the largest in the Caribbean archipelago. After Spanish rule, which ended in 1655, Jamaica became a British colony until 1962. On that date, the island claimed its independence and seceded from the British crown under pressure from nationalist movements. He then returned to the Commonwealth.

Several sources suggest that it was introduced in Jamaica thanks to the influence of British cuisine. In fact, the Jamaican rock cake is nothing more than an exotic version of its English cousin.

The basic recipe remains the same, although Jamaican recipes often mention toasted coconut and nutmeg, which give this cookie exotic notes. Also, it is customary to make Jamaican rock cakes with flour and not oats, unlike traditional English cookies.

What is the difference between a rock cake and a scone?

In popular culture, the two cookies are often compared. However, there are some differences between them. Rock cakes are generally much denser than scones. They contain less yeast and are therefore more compact.

Scone is a small loaf of Scottish origin that is usually served at tea time with raspberry jam and a thick cream called clotted cream. Therefore, scones are an integral part of cream tea.

Scones generally contain more yeast than rock cakes. British scones are generally round and contain butter, which gives them a crumbly texture. In the United States, the scones are much larger than English scones. They are usually triangular. Also, there are several variations. They can be found in chocolate, nuts, cranberries, cranberries, or chocolate chips.

Rock cake is a small dry cake of English origin, decorated with nuts, with a rough surface like a rock.

As the founder of the Les Trois Madeleines pastry blog, Sarah-Eden reinvents glamorous desserts with original cakes. She loves discovering new blogs, interacting with food bloggers, and of course she loves cupcakes!