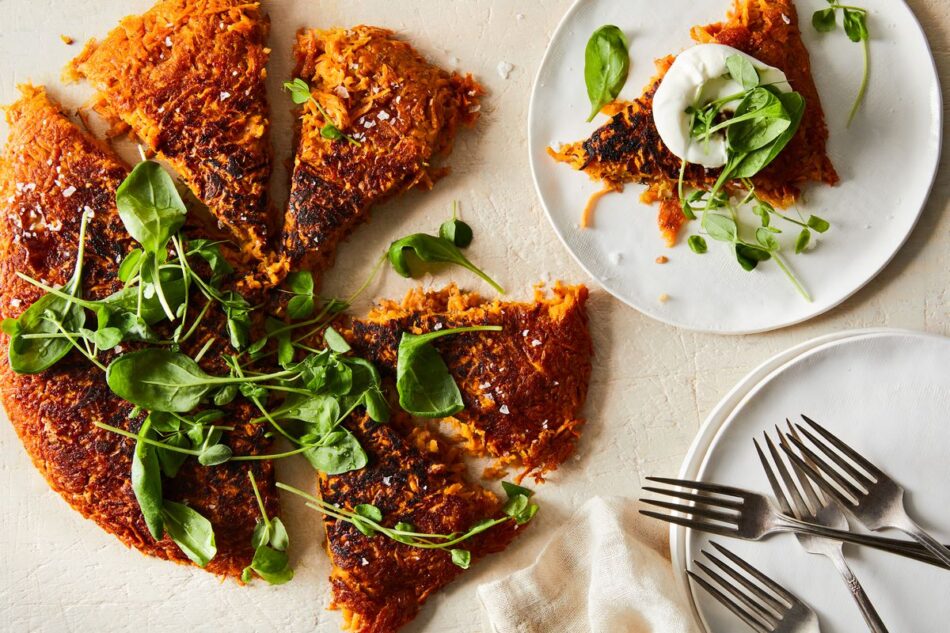 There are two truly wonderful things about working in restaurant kitchens. One, the sheer number of people you work with, such as fellow cooks, guests, farmers, vendors, dishwashers, and delivery truck drivers, etc. Two, that each of those people can teach you something new about cooking.

Arguably the national dish of Switzerland, rösti is a potato pancake with crispy edges, which is actually hash brown in a pan. More traditionally, rösti is made by browning grated potatoes in a generous amount of goose fat or butter (or both if you’ve really hit the Alpine peaks). It’s meant to be cut into wedges and shared, as opposed to something very similar to a latke, which is individually sized and often laced with eggs and flour, neither of which is necessary here.

One day at the restaurant, we were thinking about a menu item that consumed an excess of potatoes, which was also vegan and gluten-free. Allison Scott came up with the technique of using cornstarch to tie a root vegetable pie because she learned it from Josh Kulp and Christine Chikowski when she worked for them at Chicago’s Sunday Dinner Club. We ended up mixing potatoes with sweet potatoes because Beth Eckles of Green Acres in Indiana had come that day with the most delicious root vegetables we had ever tasted. We added dill because a guest overheard us talking and said her grandmother was Polish and she always used dill and sour cream in her latkes. We stack the veggies on top because everything is better with a veggie stack, especially to balance out a lot of sour cream. It was our version of stone chowder with everyone adding just a little bit.

This dish is a play on that original collaboration. Sweet potatoes naturally cross the line between sweet and savory. Also apples. They both love black pepper, so I’m going to go a little heavier here than in most recipes. You can brown the lily by adding a handful of grated cheddar or raclette cheese on top of the rosti before it goes into the oven, but that’s not necessary. Or you could serve cranberry sauce on the side to make it more festive for winter.

This is what we do every year on the night we decorate the house for the holidays. I break out the raclette, fry some rosti, and have an intimate evening, thinking of all the people who have shared their recipes, their food, their time, and their work to help make dinner better. —Abraberens

Every month, in the eat your vegetables, chef, Ruffage cookbook author, and former farmer Abra Berens shares a seasonal recipe that prioritizes vegetables (where they should be!). Have you missed a quota? Go here to catch up. – Publishers